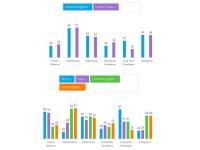 We feel very privileged to be taking the EuRA Global Conference to Goa in November.  This fascinating and massively diverse culture holds great fascination the world over.  So what are the big intercultural need-to-knows before the event?  In this blog I go back to one of my passions, intercultural research, this time on Incredible India!

India is a land of great cultural diversity.  I have always believed that intercultural study and cultural competency can only go so far in assisting cultural adjustment and mitigating culture shock and one of the reasons is, how little intercultural theory takes note of regional diversity.  And in a culture as huge as India, I can only scratch the surface with some of the meta observations. The cultural differences between the 29 states of India are profound.  Goa has big Portuguese influences and was a centre for trade and settlement of foreigners for hundreds of years so the cultural influences will be totally different from say Bihar, which has a completely different history.

So is there value in drawing such general conclusions about culture?  Well yes and no… and the research doesn’t always bare out what we experience in relocation.  An example I use a lot is in the answer to the question, “A move from which country to which other, will have the highest rate of assignment failure?”  It’s not what most people expect.  It his in fact, a move from the USA to the UK.  The research clearly shows that the US and the UK are almost a match on the 6 dimensions: 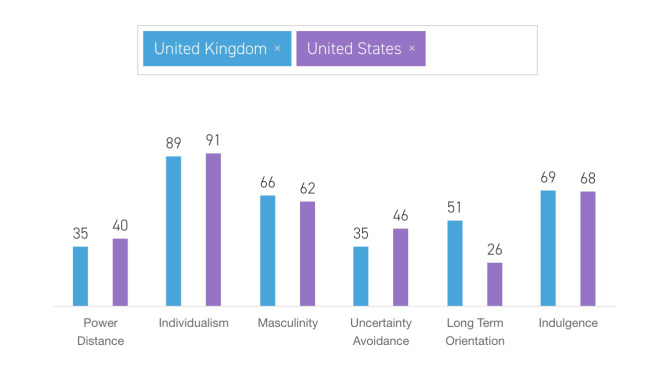 With two countries so close in cultural alignment, why would an assignment fail?

So, when looking at a culture as diverse and fascinating as India, we can really only paint in the very broadest of brushstrokes, but it never hurts to try!

All the intercultural commentary and research highlights one essential paradigm about doing business on the sub continent; Understand India!!  Set aside everything learnt during your MBA. To succeed in India and to properly cater for our customers, we need to start learning again.

Two vital components of Indian culture are collectivism and harmony.  Again, here we come up against a contradiction with the research.  Take a look at the graph below.

India (represented by the purple column) in the individualism dimension scores 48.  Although this is a slightly lower than average score, it’s a lot higher than that of China at just 20.  This dimension refers to “the degree of interdependence a society maintains among its members” (Hofstede https://www.hofstede-insights.com/country-comparison/india/) .  The score of 48 marks India as both a collective and individualistic culture, yet Indian people place a huge value on unity with others, especially community and family and isolation and seclusion are daunting prospects.  This is quite the contradiction to the research results.  So, to learn India, start learning from scratch and from our brilliant Indian relocators!

Just as in many Asian cultures such as Japan (and also interestingly, the UK) the concept of loss of face has high importance.  Dignity and honour are highly prized and showing respect for another both increases their self esteem and saves face.  Causing offence means a loss of face.  This impacts a great deal on communication as people will not wish to cause offence by speaking too directly in case it prompts a conflict.  For a culture like the US this can very hard to understand as communication is direct and offence is not taken easily.  It is perfectly acceptable in the US to contradict a colleague in a meeting, but in India this would be intolerable.  As a result a hard and fast “no”, is not a response that’s common, “maybe” is common and may often mean no.

Another dimension that impacts significantly is power distance.  This is the way we perceive equality and hierarchy within a society.  The lowest score in the comparison above, is the UK with 35.  This indicates a very flat power structure which results in open communication, an open door policy to senior managers and little regard paid to one’s position, “Just because a person is five pay grades above me, doesn’t mean I have to treat them with deference”.  The opposite is true for India, where seniority is taken very seriously.  Interestingly this is often attributed to the caste system, the social stratification that was once enshrined in law.  Although today the caste system is officially abolished, it still permeates society in a way that the class system did in British society.  But the UK has changed significantly over the past 50 years in this regard.  India, however has not, and upward mobility within the caste system remains difficult.  Being aware of the status of others is fundamental to doing business in India and roles are very defined.  An official or employee will not move above their role, but will refer up the chain of command.  This may seem like unnecessary bureaucracy to a culture with a low power distance score such as the US or UK.

Edward T. Hall, the great American anthropologist and intercultural researcher added the concept of use of time to the great cultural debate.  His work led him to categorise cultures as either polychromic (circular) or monochromic (linear) in terms of how they use time.  A linear culture, like the US or Germany, sees time as a straight line, with a beginning and an end.  Therefore in a meeting environment the agenda will be time delineated and the day will run on schedule.  The lunch break is for refuelling and the work begins again.  India is a highly circular culture.  The agenda is fluid and if all items are not addressed so be it.  In fact the nature of the discussions may tangent into an entirely new direction and this is to be regarded as a benefit, a creative advantage.  The lunch during the meeting is more important than the meeting as this is the time to build and strengthen the personal relationships on which the business will be built.  In a linear culture business is done for the end in itself, feeling dislike for the partners in the enterprise will not affect the outcome.  In the Indian circular culture the business is about relationships and trust and without this, the business will fail.

Intercultural understanding is much more than etiquette… but not making a cultural faux pas is pretty essential.  Here are some tips…

Eating with the hands is the norm, but only ever with the right hand, even if you’re left handed.  As you’re eaten with your hands, don’t handle the serving spoon, wait to be served.  Food sharing is good manners and its the tradition to order a number of dishes and share them.  Never take food from someone’s plate and never drink from someone else’s glass, not even to taste their choices.  Don’t say thank you at the end of a mea, praise during eating is polite.  In general people view being on time as impolite so good manners suggests that you be 15 to 30 minutes late.  It is common that inverted guests will bring others with them who have not been invited, both friends and business colleague, so it’s best to over cater!

As I’ve mentioned, Indian culture places huge importance on personal relationships and business is done on a personal, friendship orientation.  Being introduced for the first time  by a mutual acquaintance sets up the relationship.  Handshakes are the standard business greeting, though in some regions and many situations, physical contact between men and women in a business context may not be OK, so watch how your colleagues behave.  In a group, greet each person individually rather than addressing the group as a whole.  Because of the high power distance nature of the culture, hierarchy should be respected so always greet the most senior person present first.  Always accept a business card with your right hand.

Typically the day starts at 10am but in big cities earlier so meeting are best scheduled for mid morning or later.  Again it is considered polite to be slightly late.  However, if your colleagues are dong frequent business with Western companies (which in our industry we all do!), they will expect you to be on time.  Business dress is US European.  Body language has great significance so avoid aggressive postures of gestures such as folded arms, hands on hips.  Do not put your feet up on the furniture as feet are considered not clean.    Titles are very important, if someone has one, use it until you are invited to use someone’s given name.

Dominic Tidey is the C.O.O. of EuRA, the European Relocation Association.  EuRA is the professional industry body for relocation providers and affiliated services. As a non-profit organisation EuRA aims to promote the benefits of a professionally managed relocation to companies with globally mobile employees.