In this series of blog articles, EuRA COO Dom Tidey looks at intercultural and coaching tools for working with individuals as people and not just as examples of cultural paradigms.  The EuRA Oxford Brooks Relocation Mobility Coaching Programme looks in depth at the relationship between culture and coaching skills and will be free to access online during 2019.

“the extent to which power differences within the society, organization and institutions are accepted by the less powerful members.”

This dimension really affects the way that people will relate to each other in relation to their roles.  So a culture with low power distance will be very relaxed in terms of hierarchy.  Take a culture like the Netherlands.  Corporate structures will be very flat, senior managers will operate in an open door environment and no one is perceived as more important than anyone else, just because of their job title.  Working with a C-Suite exec from Amsterdam will be a very equal affair.  However, if that assignee is moving to country with a very high power distance, such as Malaysia, the relocation professional will automatically take a more submissive approach to them.  This will mean they may not give a true opinion for fear of losing face or offending the "senior" assignee.

So how can equilibrium be reached in these circumstances?

There is a brilliant therapeutic approach called Transactional Analysis (TA for short).   Commonly used in coaching and counselling, TA based on three basic principles;

While we can’t change the behaviour of our clients, TA helps us to identify where certain behaviours may come from and how best to interact with them to achieve a better outcome.

Eric Berne, the founder of the TA model developed the parent, adult, child theory that states that each person is made up of these three ego states and we move between them according to our feelings at the time.  Understanding what ego state someone is in during an interaction is important as what’s known as “crossed interaction”. 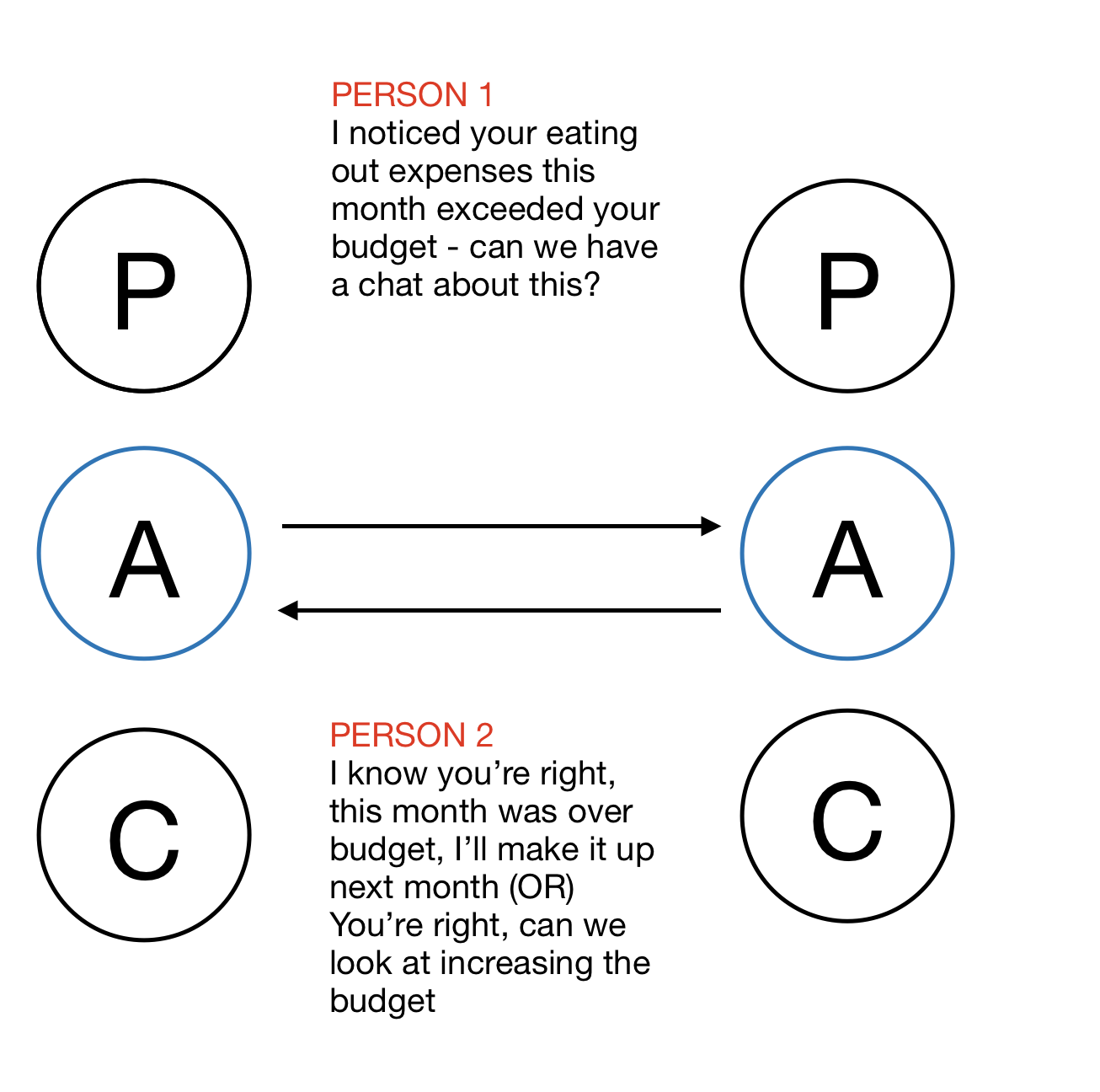 This diagram shows a crossed transaction; 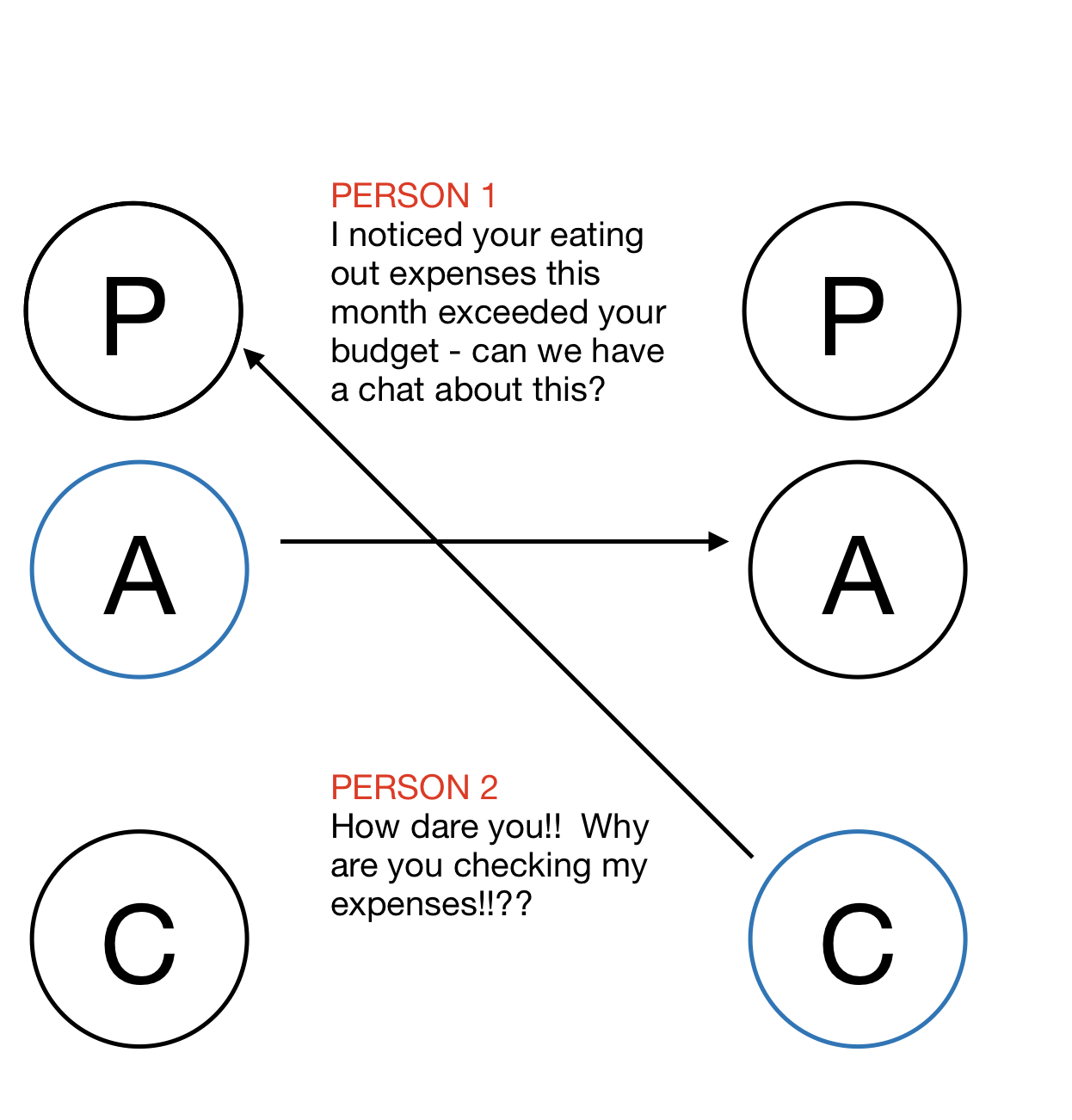 Here the participants are in different ego states.  Person 1 asks a question from the adult state but gets a response from person 2 in the child state.  Person 2 is feeling patronised.  The result is conflict.

This model really comes into its own when working between cultures with different power distances.  Being able to diagnose the ego state of another person is an art, but there are lots of tips and tricks on YouTube (of course!) like this one for example

Words, tone, tempo of speech, gestures, and postures all give clues to guide us as to the ego state of another.  Parental mode is indicated by judgements.  Adult mode is characterised by clear and definable speech.  Child mode speech tends to be direct and spontaneous.

So next time we find it frustrating to work with someone from a culture which regards seniority and hierarchy differently to ours, watch for the TA cues and remember, we’re all individuals, not just an example of our home culture.

Dom Tidey is the C.O.O. of EuRA, the European Relocation Association.  EuRA is the professional industry body for relocation providers and affiliated services. As a non-profit organisation EuRA aims to promote the benefits of a professionally managed relocation to companies with globally mobile employees.